BAA Men's Softball Charity Golf Tournament Friday September 23, 2022 12PM shotgun start at Far Corners GC. Rain or Shine. $200.00 registration fee. NO REFUNDS! Limited to 80 participants on a first-come-first-served basis. ALSO, PLEASE DO NOT COMPLETE SHIRT SIZES. THIS IS NOT THE SWAG FOR THIS YEAR'S EVENT. WEBMASTER DID NOT DIABLE THE REQUEST 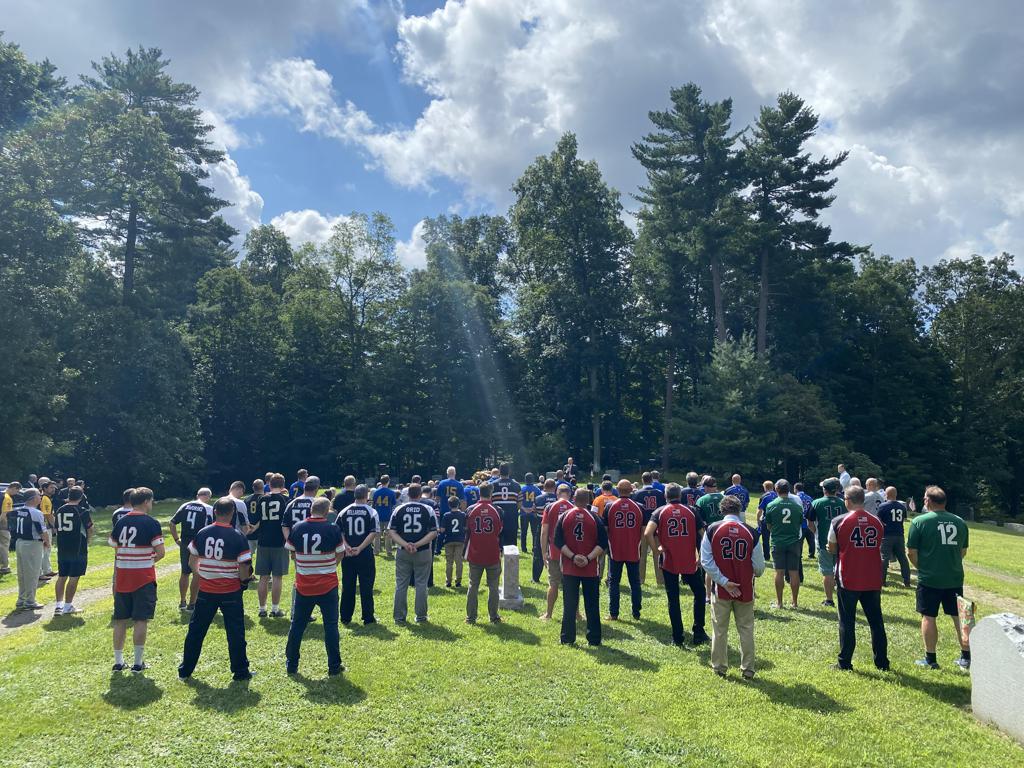 The Registration "Boxford Men's Softball" is not currently available.

CELEBRATING OVER 40 SEASONS OF COMPETITION, MEMORIES AND LAUGHS!

The BAA Men’s Softball league (the "League") has been enjoyed by Boxford residents since 1981. More than 240 players gather each summer to relive the glory days of their youth - some successful....most not so successful!

The League consists of Boxford residents and town employees only. It  provides  an amazing opportunity for families new to town to meet other residents in a fun and social atmosphere. The strength and longevity of this League is built on community and purpose both on and off the field. This is a league where life-long friends not only can, but will, be formed. A league where fathers and sons have the chance to play competitive sport on the same team.

The League is comprised of fourteen (14) teams split into two divisions (North and South). Teams typically play two (2) (but occasionally 3) games per week starting a 6:30 P.M. The season starts in mid-June and continues through late August including playoffs.

Players MUST meet the following criteria:

The season winds down with a charity golf tournament followed immediately by an end of season banquet.

Looking forward to seeing you on the softball field!

Check out our Facebook page at Pulled Hammy's Take Two for more information and insight.

The BAA Men's Softball league (the "League") has been blessed with an endless list of quality individuals over the past four decades. Starting in 2020 the League would like to acknowledge those players who have recently passed.

Although no longer in the line-up their spirit remains each season, game and at bat.

Tryouts consist of fielding and batting. Tryout jerseys will be provided to each participant. New players unable to attend the tryout/draft will have their name go into the hat to ensure selection to a team.

The annual One Pitch tournament will be held on Saturday June 18th at Johnson  field (J1 and J2) with games starting at 8:30am. This is a great kick-off to the beginning of the season.

The season opens with games on Monday June 20th.  All fields are expected to be in use this season.

The annual all-star game will be held at Jim Locke Field on Sunday September 18th starting at 2:30pm.

The BAA Men’s Softball Charity Golf Tournament will be held on Friday September 23rd 12 noon shotgun start. Participants will be limited to eighty (80) players on a first come first serve basis. On-line registration will be available in early August.

Golf will be followed by the annual end of season banquet (6:30pm start time).

The B.A.A. does not discriminate on the basis of sex, gender identity, race, color, religion, national origin, marital status, age, sexual orientation, handicap, disability or ability to pay.  The Boxford Athletic Association does not tolerate sexual harassment by any participant in its programs, adult or child.