The right hand is the "action" hand and the plate umpire uses the action hand to signal things like play, strike, out, fair ball (i.e., live ball), infield fly, and so forth. He uses his left hand for controlling the game or when pointing to a partner, when controlling the pitcher, and for holding the indicator and the mask.

There is no signal for a called ball. Instead, simply verbalize the call, "ball". Call the ball while still down, then come up. On ball four, don't point to first base, just say "ball." If the batter doesn't head toward first base, you can simply say to him "that's four."

Signal strikes with your right hand. Use the traditional clenched fist ("pounding the door"), or signal with your hand/finger shot out to the side. On a called strike, verbalize sharply; everyone should hear. On a swinging strike do not verbalize; simply give the signal.

Extend both arms together in front of you and then give a quick, sweeping motion outward, roughly parallel to the ground, palms down. On close plays, you can also verbalize the call, "safe", or "he's safe". This helps sell a close call. You can also verbalize information to help sell an extremely close call, things like "Safe - he's under the tag", of "Safe - he pulled his foot." On obvious calls ("stadium calls") don't verbalize the call.

Form a hammer with a clenched right fist and deliver a quick, sharp blow. Some degree of personal style is allowed on the out call, as long you are not distracted from seeing any continuing action. If necessary, verbalize and signal additional information to sell a close call, like "off the bag" or "on the transfer."

The signal for foul ball is the same as for "Time" or other dead ball situation: Raise both hands and call loudly "Foul." Make the call loud and sharp, so everyone hears. Note that, once verbalized, you cannot reverse a call of foul ball.

Point at the pitcher with the right hand with a stabbing motion and call "Play."

You must put the ball back in play following every time the ball goes dead, whether foul ball, hit-by-pitch, called "time", or other reason. When the pitcher has the ball and is ready (he must have engaged the rubber), and the catcher is in the catcher's box and is also ready, point and call "play". Under no circumstances should you allow the pitcher to go into his windup until you have called "Play".

Raise both hands and call "Time" in a loud voice. Make the call loud and sharp. It is essential that everyone on the field hear you.

time (with a small "t"). There are occasions when time is out, but "Time" has not been called. An example is when the pitcher is ready but the batter is not yet set; in this case, the plate umpire might put up his hand as a stop sign to the pitcher, signaling him to wait. It is important to understand that when you put up a stop sign like that you have called time. So you must put the ball back in play.

Indicate pitch count using the left hand for balls and the right hand for strikes. On fields that do not have scoreboards, give the count frequently; always give the count on an "action" pitch (with three balls and/or two strikes). Call the count loudly, so both benches (and base coaches) can hear it clearly. Finally, don't abbreviate the count by verbalizing things like "twenty-two" for two and two, or saying "full count" when the count is three and two. 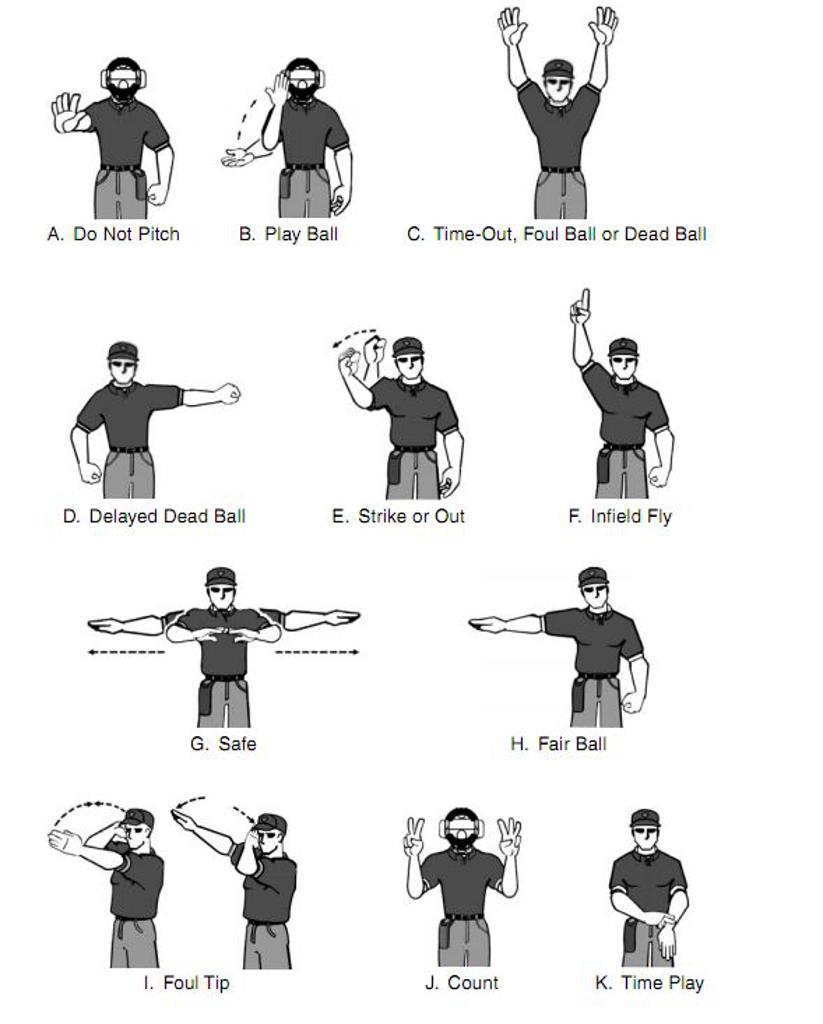